Sri Lanka has announced a squad of 15 players for the T20 World Cup, in which two are injured. 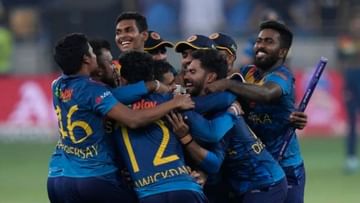 Sri Lanka won the Asia Cup title for the first time since 2014.

Sri Lanka, who won the recently concluded Asia Cup, has announced a 15-man squad for the T20 World Cup under the captaincy of Dasun Shanka. Along with this, the names of four standby players have also been announced. Sports Minister Roshan Ranasingha has approved these names. Sri Lanka has not got a direct entry in Super 12. She will try to qualify for Super 12 by playing group rounds.

Chameera will have to prove her fitness

The Sri Lankan board has not made much changes in the team that won the Asia Cup. The team’s star fast bowler Dushmanta Chamira has suffered a heel injury, despite this, she has been given a place in the team. He will have to prove his fitness before leaving for Australia. On the other hand, fast bowler Lahiru is also not completely fit and his place will also decide his fitness.

Chandimal got a place in the standby players

Matisha Pathirana, who debuted in the Asia Cup, has neither found a place in the main team nor in the standby players. Apart from them, Nuva Tusara and Asith Fernando have also been dropped from the team. The middle order batsman Dinesh Chandimal made a comeback in the T20 team with the Asia Cup but he has also got a place only in the standby players. Fast bowler Dilshan Madhushanka has been rewarded for his excellent performance in the Asia Cup and has been given a place in the team.

Sri Lanka showed a great game in the Asia Cup held in UAE and managed to become the champion. After suffering a defeat in the first match of the tournament, he did not play any match. This team, which was battling financial crisis, showed a wonderful game. Sri Lanka will play their first match in the tournament against Namibia on 16 October. At the same time, on 18 October, she will play against the UAE and then on 20 October against the Netherlands.