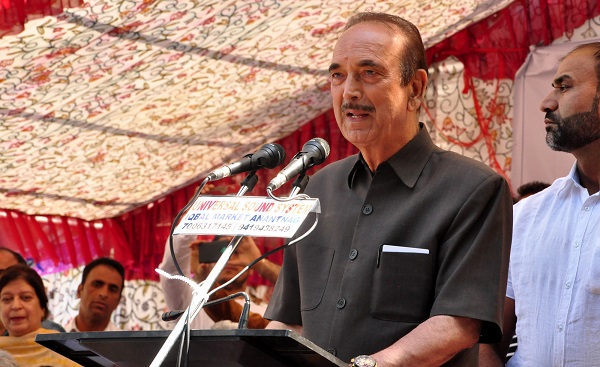 Anantnag // Former Chief Minister Ghulam Nabi Azad has said that he received death threats from the militant organization TRF. “Thoughts are also free.” Addressing a gathering at Dak Bangla, he said, “There was a fake clash during my tenure, after which I ordered exhumation of graves and put the involved officials behind bars. Unfortunately, however, no non-local officer was involved in the incident but a Kashmiri. He said that he was informed by a colleague that the militants had threatened to kill him for visiting the valley. Before doing so, I had met the National Security Adviser Ajit Dobhal and the Home Minister, however, I know God is present and say that I have not even met the Security Adviser, although I have met the Home Minister several times. Azad He said that he has free thinking and he does not know how to enslave anyone.

He said that I do not do politics of buying and selling, he has received many such threats in the past but he is not afraid of threats. He said that he has been a major political leader of the opposition, he can meet anyone in Delhi, which is the job of a politician, without naming any party or political leader, he said that ‘dirty thinking politics’. Mind-set politicians inform militants. Azad sought public support to bring the Union Territory out of the shadow of “fear, unemployment and helplessness”. Azad said that he would not raise emotional issues like “independence”, “autonomy” or “self-rule”, but would only discuss issues that could be achieved. He said, “I like these leaders. I don’t want to play with your emotions to win elections.” Azad said there are two ways to be a leader, one by raising emotional slogans and the other by talking only about issues that are within his control. “I would say you will get freedom, but you won’t, have you got it for the last 75 years?” I would say you will get autonomy (NC slogan) or self-rule (PDP slogan), many elections were fought on them, but nothing was achieved. “Playing with people’s emotions,” he said. I am not a leader, I am the first to raise my voice about pellet gun”. We have met. On reaching the dargah, he was given a warm welcome and he was also clothed there.