IND Vs SA T20 Todays Match Highlights: South African team has not lost the T20 series in India yet. This time Team India would like to give him this wound. 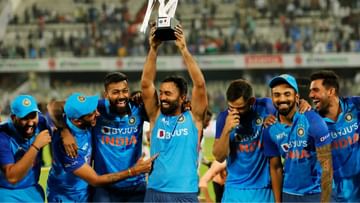 After the Asia Cup-2022, there were many problems in front of the Indian cricket team. To overcome these shortcomings, he had a series to be played against Australia and South Africa. He may have defeated Australia in the three-match T20 series but his troubles have not gone away. To overcome these shortcomings, the three-match T20 series against South Africa is his last chance.

Against South Africa, the Indian team will go into the T20 World Cup with the intention of improving their bowling in the death overs and giving good practice to the batsmen. Apart from the bowlers in the final overs, India’s problem is also not getting runs from their opening pair. South Africa has not lost the T20 series in India yet. This time the eyes of Team India will be to defeat South Africa.

warm welcome to the team

When Team India reached for this match, the audience gave them a warm welcome. On reaching the hotel in Thiruvananthapuram, Team India was welcomed with flowers. The video of this has been posted by BCCI on its Twitter handle.

These players will be missed

After winning the series against Australia, Indian captain Rohit Sharma said that there is a need to improve the death bowling. The Indian team will miss two of its key bowlers, Hardik Pandya and Bhuvneshwar Kumar, who have been rested ahead of the T20 World Cup. Mohammed Shami has not yet recovered from the corona infection and he will not be able to play all three matches. Harshal Patel returned to the series against Australia after recovering from injury but conceded runs at an average of 12 and had an economy rate above nine.

Standby Deepak Chahar for the World Cup did not get a chance in the last series and now he can play in three matches if the fast bowlers are rotated. Arshdeep Singh will be expected to perform well in the slog overs who will support Jasprit Bumrah. Yuzvendra Chahal bowled well on the turning pitch in the third match after the pitch remained flat in the first two matches against Australia. Keeping in mind the pitches of Australia, Chahal will go with the intention of improving his performance.

Rohit Sharma has talked about giving a chance to all the players before the World Cup, so R Ashwin can be dropped in the playing XI. KL Rahul could not run against Australia in batting and he would like to make up for it in this series. Virat Kohli and Rohit Sharma are in form and Rahul will also have to score runs at a fast pace. Dinesh Karthik got only eight balls to play against Australia and Rohit has already said that he needs to give more time at the crease. Deepak Hooda, who was included in the World Cup squad, will not be able to play against South Africa due to a back injury. Shreyas Iyer can be fielded in his place.

South Africa has not lost yet

India has not defeated South Africa in the home bilateral series. Both the teams will face in the group stage of the World Cup in Australia but the conditions will be different in that. Both the teams can find out their weaknesses in these three matches and work on them. South Africa’s Tabrez Shamsi said, in Australia the pitches will be different and the grounds will be bigger but the bowler should always keep working on his performance. This will be a golden opportunity to try Indian batsmen.