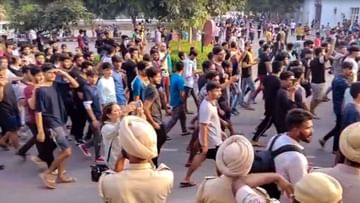 There has been a big disclosure in the Chandigarh University MMS scandal. It is being told that both the accused boys and the girl student had deleted the data from the mobile for fear of being caught. In the investigation, the police have found only 4 videos of the accused student from her mobile, which she had sent to her friend. Police suspect that the accused have also hidden mobile phones and other electronic devices. In such a situation, now the Punjab Police will take both the accused to Shimla to recover the electronic device.

According to the information, all the three accused, including the accused girl, are residents of Shimla and were in contact with each other for the last almost 3 years. The investigation of the SIT rests on these points whether MMS racket was being run in Chandigarh University?

Police will also find answers to these questions

Along with this, the police is also probing whether the accused girl was stealing video clips of other girl students and selling them to her friend or she was being blackmailed for this work? How many girls’ MMS has she sent to both her friends so far? Punjab Police will also find the answer to this.

Smiley Sharma studies in Chandigarh University and belongs to a middle class family. Smiley’s father does a private job. On the other hand, Chandigarh University has constituted an internal inquiry committee regarding the MMS scandal. The university management has formed a 9-member committee under the chairmanship of the head of the Women’s Cell. 3 student representatives and 6 professors have been included in this committee. This committee will investigate the entire incident and prepare a report and submit it to the management.

Earlier, a court on Monday sent the three accused to police custody for a week. The police produced the three accused in a court at Kharar in Punjab’s Mohali and requested for ten days’ custody. Protests have been taking place in the university campus located in Mohali, Punjab since Saturday night over the allegations leveled by the girl students. There are allegations that many objectionable videos of girl students were recorded in the toilet of a hostel.