The wedding rituals of Bollywood stars Richa Chadha and Ali Fazal have started. The preparations for the marriage of both are going on in full swing. Meanwhile, a video of the pre-wedding cocktail party of both has surfaced. 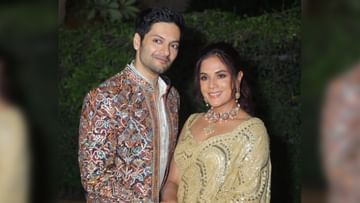 Richa Chadha Ali Fazal Wedding Function: Bollywood’s famous couple Richa Chadha and Ali Fazal are constantly making headlines for their marriage. Richa and Ali will tie the knot after a few hours. The pre-wedding functions of the marriage of both are being done with full gusto. Mehndi rituals have been completed. Ali’s name has also been applied on Richa’s hands. Both are openly sharing pictures of their wedding rituals on social media.

Meanwhile, some pictures and videos are going viral on social media. In which Richa and Ali have arrived at their pre-wedding cocktail party. In this viral video, Richa Chadha is seen in a light golden shimmer sari. Along with the sari, the actress has also carried matching jewellery. Richa is looking very beautiful in this look. At the same time, Ali Fazal is seen wearing a sherwani embroidered in light pink color. In the video, both are seen holding each other’s hands while entering.

The glow of marriage can be clearly seen on the faces of both. Some pictures of this couple are also going viral on social media. In which both are seen posing in front of the paparazzi. Their fans are very happy to see both of them together. Fans are constantly congratulating Richa and Ali for their marriage. Glow can be clearly seen on Richa’s face before becoming a bride. Let us tell you that before this function, both of them also got a pre-wedding photoshoot done. Which both of them also posted on their respective social media accounts.


Let us tell you, even before Corona, both of them had made up their mind to get married. But the pandemic had ruined all their plans. Not once but many times the marriage of both has been postponed. In such a situation, now finally this pair is going to be one. Richa and Ali are dating each other for the last 10 years. Their love story is no less than a fairy tail. The love story of this pair started during the Bollywood film Fukrey.