Cheetah coming to India: The question is if the cheetah is the biggest predator. There is no match for his speed, so what is he afraid of? 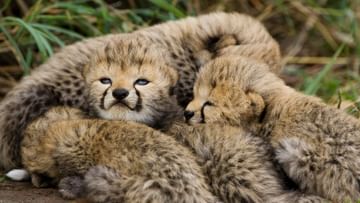 Up to 90 percent of cheetahs become prey at an early age.

finally after seven decades cheetah (Cheetah coming to India) Returning to India again. This wild animal, which is called the biggest hunter in the forest, had disappeared from India 70 years ago. Now their return is really a historic moment because it has raised a great hope not only for India but for the whole of Asia. in Asia only in Iran cheetah Left, that too only 12. If cheetahs can settle their homes again in India and increase the population, then it will be really a big achievement. But there is also a big fear about these cheetahs.

Today 8 cheetahs will fly from Namibia to India in a special plane. Will reach Gwalior tomorrow morning, from where they will be taken to Kuno National Park in Madhya Pradesh. Prime Minister Narendra Modi himself will welcome him on the occasion of his birthday. Now the question is if the cheetah is the biggest predator. There is no match for his speed. If it can catch the speed of 110 km in just 3 seconds, then why should such a ‘Sultan’ be afraid? Let us tell you. (Cheetahs are coming…see the complete route map here)

Enemies are full in the forest

The cheetah is very agile, but the forest is full of its enemies. Lions, leopards, hyenas are in his pursuit and kill him as soon as he gets the chance. Especially when cheetahs are cubs. Cubs are eaten by wild dogs. It is believed that more than 95 percent of cheetahs are killed in the wild in their childhood. 70 percent of cheetahs are killed before they reach the age of 3 months. This is also a major reason for their decreasing population. Ullas Karanth, director of the Center for Wildlife Studies, has expressed this concern in a conversation with National Geographic. He says that he has no problem with this project, but suddenly cheetahs are being brought into the forest among humans and released. The human population has steadily increased in the last 70 years.

Cheetahs cannot be kept in captivity only in the Kuno National Park. But outside the forest, danger is lurking for them. If they lose their way and go somewhere far away, then it can be difficult. It will be a big challenge to monitor them 24 hours. Even if the cheetah escapes from being hunted, the danger of dying of starvation will remain. Cheetah makes its prey only to weak and light animals in weight. Whereas animals like lions, tigers and leopards hunt by ambush, no matter how big it is. These wild animals do not like to see any kind of challenge standing in their area.

Ullas Karanth says that even in the year 2009, not everyone was in favor of bringing cheetahs to India. But some people dreamed to the Environment Minister that by doing this you will become famous. He said that once the cheetahs come out of their enclosure, it will be very difficult. There is nothing outside Kuno. There are only villages, farms and dogs. Von der Merv, a well-known environmentalist and who played a key role in bringing cheetahs to India, also says that there is no doubt that we are going to lose a large number of animals. However, the administration argues that all cheetahs have collars in their necks, so that they can be monitored for 24 hours.