During the Congress’s ‘Bharat Jodo Yatra’, the different style of Rahul Gandhi is being liked by the people. Meanwhile, a video of him is going viral on social media in which he is driving a boat. 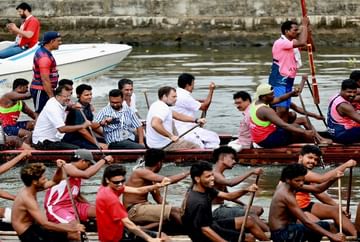 This video has been shared by Indian Youth Congress President Srinivas Biwi on his Twitter handle. In its caption, he has written, ‘The boat does not cross fearing the waves, those who try do not lose. During #BharatJodaYatra when Rahul Gandhi participated in the boat race.

Fearing the waves the boat does not cross, those who try do not lose#BharatJodaYatra during when Mr. @RahulGandhi Took part in Boat Race.. pic.twitter.com/fnyQmPGSoy

Rahul discussed with the fishermen

Rahul Gandhi interacted with the fishermen community at Vadkal beach on Monday morning before starting the 12th day of the yatra. During this, he discussed with the fishermen various challenges including rising fuel prices, reduction in subsidies, depleting fish stocks and damage to the environment.

Senior Congress leader Jairam Ramesh tweeted, “Rahul Gandhi addressed Alappuzha at 6 am on challenges related to rising fuel prices, reduction in subsidies, depleting fish stocks, not getting pension, inadequate opportunities for education and damage to the environment.” Interacted with the fishing community at Vadkal beach.

Let us inform that this yatra started from Punnapara on Monday and senior Congress leaders K Muraleedharan, K Suresh, Ramesh Chennithala, KC Venugopal and Leader of Opposition in Kerala Legislative Assembly VD Satheshan were also present in the padyatra along with Gandhi.

Let us tell you that Monday is the 12th day of Rahul Gandhi’s India Jodo Yatra. So far in this journey, Rahul has covered a distance of more than 200 kilometers. Congress’s ‘Bharat Jodo Yatra’ will be completed in 150 days and a distance of 3570 km will be covered under it. The yatra started from Kanyakumari in Tamil Nadu on 7 September and will end in Jammu and Kashmir.

A journey of 450 km across seven districts of Kerala

The Bharat Jodo Yatra, which will enter Kerala on the evening of September 10, will pass through different parts of the state (Kerala) covering a distance of 450 km through seven districts in 19 days before entering Karnataka on October 1. Let us inform that the Bharat Jodo Yatra of Congress under the leadership of Rahul Gandhi resumed from Haripad in Kerala on Sunday, in which hundreds of party workers and leaders participated.