Before the T20 series against Australia, Team India was seen doing catching practice in a different way in the field, BCCI posted video. 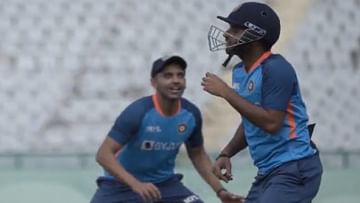 Team India did fielding practice in an interesting way

Teams from all over the world are busy in their preparations to win the T20 World Cup. Indian cricket team is also doing similar practice with great enthusiasm. At present, the team is busy preparing for the T20 series against Australia and for the first match to be held in Mohali, he sweated heavily on the field. But during the training of Team India, something happened that all the fans were stunned to see. Actually team india The players were seen hitting the ball on the helmets of their own teammates. BCCI has posted a video in which the ball is being hit on the player’s head.

Team India players are doing catching practice by hitting the ball on their partner’s head. Actually it is a preparation to catch those catches which are often spilled from the hands of a player and then the player standing nearby has to catch the ball. Many times such catches are seen in matches and Team India is preparing for this. Along with having fun in this practice, good training is also being done.

Let us tell you that Team India has to play a three-match T20 series against Australia. This series is important for India because Australia is a strong opponent and they will get good practice before the T20 World Cup. Also, this series is an opportunity to rectify the mistakes made by Team India in the Asia Cup.


In this T20 series, Team India has to do the most work on the selection of its playing XI. The wrong selection of the playing XI in the Asia Cup caused a lot of damage to Team India. Apart from this, Team India will also have to decide the option of its wicketkeeper. What will be the combination of bowling and all-rounder is also an important question which needs to be answered.