During the conversation, Imam Umer in the madrasa said that now we are moving towards modern education and he assured the Sangh chief that he will teach Sanskrit and Hindi there. 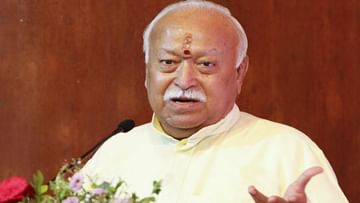 To gauge the pulse of the current situation in the country Rashtriya Swayamsevak Sangh (Rashtriya Swayamsevak Sangh) is holding a meeting with the non-Hindu community these days. In this episode today RSS chief Mohan Bhagwat (Mohan Bhagwat) met him at the house of Imam Umer Ahmed Ilyasi, head of the All India Imam Association. After this, he talked to the children and the clerics who trained there in one of his madrasas of Bada Hindu Rao. Senior pracharak Indres Kumar, who was in this meeting with Sarsanghchalak Mohan Bhagwat, told that this process of conversation had started during the time of former Sarsanghchalak Sudarshan ji. At that time, curiosity was shown from the Muslim side, but the implementation was not that much.

There was a discussion at Ilyasi Sahab’s house that why only foreign or Indian language in the studies of madrassas? Why is there no Gita in the study of madrassas? Later we all went to his madrasa with Ilyasi sahib. There Mohan Bhagwat ji asked many questions to the children like.. what is the name of your country? The Sangh chief asked which countries are there around India? The Sangh chief also told the children about all the states and languages ​​of the country. He said that the country should know and believe.

The sarsanghchalak asked the children of the madrasa, what will you become if you study? In response, the child said teacher and doctor. On this, the Sangh chief said that how can one become a doctor in a madrasa only through religious studies and without scientific studies? The Sangh chief told the children that one should always do noble work, which will benefit everyone. He said that doing good to others is like going to heaven. Sarsanghchalak Bhagwat asked the children of the madrasa how a woman should be seen! Then he told them that women should always be looked upon with respect and women should be respected. Mohan Bhagwat told the children that the money of others should be treated like clay.

During the conversation, Imam Umer in the madrasa said that now we are moving towards modern education and he assured the Sangh chief that he will teach Sanskrit and Hindi there. Along with this, we will also teach the Gita. Because he said that Hindi is the only language connecting everyone, while Sanskrit is the most prosperous language. Gita gives us the knowledge to make the best of life, so we will bring them all in the curriculum.

Indresh Kumar told why there was a need for dialogue

Indresh Kumar said that now the time has come, so it was decided to hold talks as the present Sarsanghchalak Mohan Bhagwat got letters from thousands of people of different religions, who talked about meeting and talking. He said that the minorities of the society should not be affected by any kind of misunderstanding and an initiative has been started to end the propaganda that was done. Indresh Kumar said that due to political reasons, till now, instead of training and progressing the minorities of the country, efforts have been made to separate them from the main stream. That’s why dialogue is necessary now. Indresh Kumar said that Bhagwat has spoken to the minority community in the past as well. The fourth round of talks which started from June 24 is going on. For the fourth time we are doing dialogues.


Our roots and DNA are one: Mohan Bhagwat

In the meetings held in Mumbai and Ghaziabad, he told that our roots and DNA are one, we are all children of Mother India and none of our roots are abroad. The conversation that has taken place so far includes Muslim, Christian, Sikh communities. Last month on 22nd August also met 5 scholars in Delhi and interacted with them in a very cordial atmosphere and also gave solutions to whatever was in their mind and said that we all have to work together.

September 26, 2022
Seeing the strawberry and blueberry samosas, the users stunned, said- ‘Have they come from another planet’

September 26, 2022
Fans in Kerala took the name of this special person in front of Suryakumar, the player did this work again